Automatic encapsulators are wonderful machines that can produce amazing results, but sometimes the initial learning curve of operation and maintenance can be daunting. We at TES want you to be able to keep your machines up and running at optimal efficiency all the time. In line with that, we want to provide you with answers to the most common questions we get. The first of these is “Why aren’t my capsules separating?” This can be caused by a number of reasons. All are very straightforward, but it’s good to have a checklist to make sure you’re not missing anything. Note: This is the second half of the list, the first section is located here.

The third thing to check is the magazine, and sorting forks. The magazine should come as close to the sorting block as possible to guide the capsules into the segments. If this is too high your capsules might not be rotating enough before the vacuum tries to pull them down, so some miss, and if it’s too low, you’re actually damaging your magazine, and potentially misaligning parts every rotation of the machine when it hits the sorting block. The sorting forks need to be centered, both the horizontal and vertical ones. You want to make sure that your vertical fork is hitting the spot on the capsule where the top and bottom meet. Otherwise they won’t rotate correctly. The only exception to this is if you are running an elongated capsule, where you may have to have the capsule push out a bit past that point. 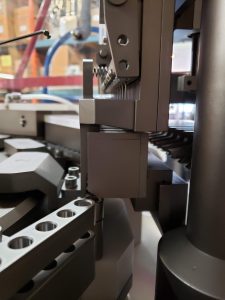 And for the fourth and final common machine adjustment we see that you can take a look at is the vacuum shoe assembly. This one varies a bit more machine to machine, but the idea is the same: Make sure you have a good seal on the bottom of the segment, and make sure the shoes and their vacuum lines are clean. Newer model machines (The TES 1200A and 2000A for example) don’t have as much adjustment here, so the seal should be set. On those you just want to make sure that the holes don’t have powder built up in them, so you’re getting the most out of your vacuum pump that you can.

For older machines, you should check the powder buildup as well. Beyond that there were more adjustment options with the motion shafts below the vacuum shoe. In those models (ZJT series or ACF series of machines), you want to make sure that the shoes 1: have some movement to them. They need to be able to wiggle just a tiny bit to sit up against the bottom of the segment as flush as they can. We usually set our shoes up to go as tight as possible so they stop moving, then move the lock nut about ¼ of a rotation back to let it wiggle just a bit. On top of that you need to make sure that the timing is correct. The vacuum shoe should come up right when the segment reaches its position below the magazine. If it comes up too early the segment could hit the side of the shoe and damage it, and if it’s too late, you don’t get the suction for a long enough time to separate the capsules.

Finally, there’s a problem we see sometimes that isn’t related to the machine itself, and that’s just the fact that sometimes you have capsules that won’t separate. Usually this is a climate control issue. Here in Utah we don’t get too much humidity, but for some customers, humidity ruins capsules very easily. If they’re moist, they stick and won’t separate. Alternatively, if your capsules are stored in a location that’s too dry for too long, they become brittle and crack rather than separate nicely. If you’re seeing these issues, see how old your box of capsules is and try a new one. 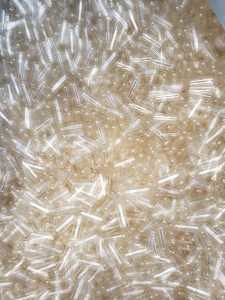 Other than climate and age, if your capsule boxes aren’t handled properly, you can cause the last few in a box to not separate well by locking the capsules. Capsules come in a pre-locked state that keeps the top and bottom together, but makes them easy to separate. If operators or delivery personnel are dropping the box of capsules from a few feet in the air, the impact can make some of the capsules in the box press together and lock up, so that they can’t separate easily with vacuum. Just make sure you’re setting things down easily when moving capsules around to minimize this, and if you’re seeing capsules not separate and you’ve checked everything else on the machine, try a fresh box to see if it helps.

Check out the first TES FAQs post here that goes into more detail about why your capsules might not be separating. It covers vacuum pressure and proper segment alignment and cleaning.